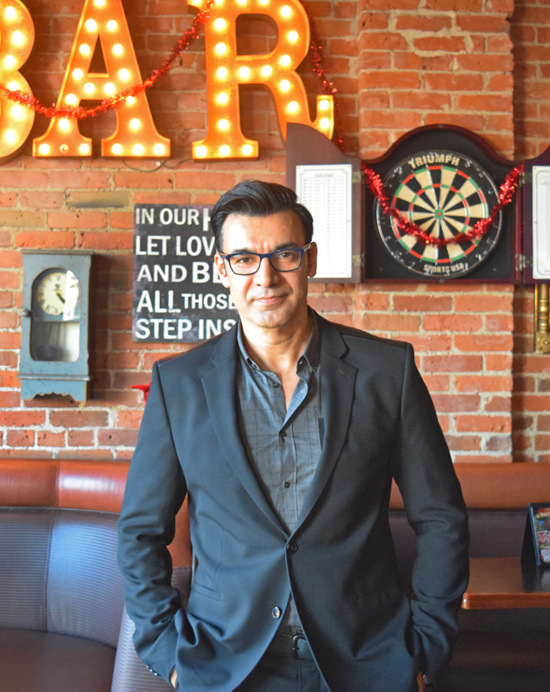 Francois Safieddine is a self-made entrepreneur who entered the hospitality industry by working within and advancing quickly at a major fast-casual concept. Continuing entrepreneurial success over the last decade, Safieddine went on to open several restaurants and lounges, leaving his footprint on Colorado’s nightlife and dining landscape.

To say that hospitality runs in Kasie’s family is an understatement; growing up, her father owned restaurants and her brother owned bars on West Virginia’s college campus. Kasie herself began working in restaurants at 14 and has worked her way up the ladder from server to regional manager to vice president. She graduated from Boston University with a degree in Hospitality and played college basketball. She attributes her past as a collegiate athlete to her hands-on leadership style and her drive to make a difference.

As a kid, Johnny always found himself in the kitchen. His father was a chef and owned restaurants in California, Colorado and Mexico. Following in his father's footsteps, Johnny attended culinary school in Mexico and found himself in Aspen, New York, DC, Chicago, Philly and sought mentorship from culinary icons Richard Sandoval and Troy Guard. Today, Johnny leads the Lotus culinary team both in the kitchen and from behind the scenes with a team that is young and hungry (pun intended).

Tyler first became exposed to the hospitality world through his first job at a catering company and fell in love with the people and camaraderie that the industry brings to the table. With ViewHouse, every day holds a different challenge that can range from executing a huge turnout on a night with live music, putting on a 150 person private event, managing through the Broncos and Sunday football, or all of the above at the same time! With a past in theater, Tyler thrives off the organized chaos and the performance of a career in hospitality.

Director of Operations at My Neighbor Felix

With over 25 years of hospitality experience, it’s safe to say that Yesenia loves her job. It's one of the few jobs that she believes relies entirely on our ability to work with and for people, making it a challenging career (but she has never been one to back down from a challenge). Working at My Neighbor Felix has allowed her to continuously learn and grow alongside her team as they navigate the day-to-day evolution of the industry. She has lived in 8 cities in 6 states, and has been to over 40 countries and can't wait to keep exploring.

Described as a "revolutionary innovator," Shelby has redefined what traditional marketing means for hospitality. To Shelby, there are no limits. Instead of just a meal, she leads her teams to conceptualize and execute memorable experiences that go beyond the plate. Her most recent projects include co-creating and designing two original nightlife venues in Arizona, as well as leading the concept and brand design for a steak and sushi restaurant in Salt Lake City.

Unlike most of the Lotus team, Mia found hospitality late in her career after burnout as an accountant led her to give bartending a try. While she enjoyed bartending, Mia stumbled (literally, she broke her foot skateboarding) into her role as financial controller at Lotus CMC and the rest is history. At Lotus, you’re not restricted by a job title and Mia likes being a part of something where you can be a part of everything.